Then one of the most powerful and wealthy men in Greece offers Alexio his daughter’s hand in marriage, and Alexio decides that maybe a wife especially one as compelling as Ione Gakis might not be a bad idea after all. Unbeknownst to anyone outside of the Gakis family, Ione was adopted and has been fostered in an abusive and neglectful environment a desperate prisoner on her tyrannical father’s luxurious island. Marriage to Alexio can mean only one thing: escape. And if that means marrying a complete stranger and fleeing to England to find her real family, then the sooner Ione can get that wedding ring on her finger, the better. But despite his compassion for Ione, Alexio won’t tolerate a runaway wife. And he’s going to make damn sure Ione never leaves his side or his bed!

‘SOONER or later, you will surely choose to marry someone,’ Sander Christoulakis pointed out, his emphasis of that last word reluctant. ‘Why not Ione Gakis?’

Alexio made no response. On one level, he could not believe that this peculiar conversation was actually taking place. Once he would have laughed in his father’s face at the very idea of an arranged marriage. But, for almost two years, Alexio had been living in a hell of grief from which he only escaped when he buried himself in work. In a desperate attempt to obliterate the yawning emptiness inside him, he had flung himself into a series of wild affairs but no miracle recovery had followed. Indeed, if anything, those shallow sexual entanglements had left him with a sour taste in his mouth.

‘It is an honour that Minos Gakis should have approached our family with the offer of his daughter,’ Sander continued with quiet persistence, watching his volatile son with hopeful measuring eyes for his reaction. ‘He has a very high regard for your business acumen and his health has been troubling him. He needs a son-in-law whom he can trust.’

Alexio was grimly amused by that clever speech, which suggested that a marriage arranged between families rather than by the young people concerned was as common an event as it had once been in Greece—for it was anything but. He was also marvelling at how the attention of one of the world’s richest men appeared to have blinded his astute father to less palatable truths. ‘Minos Gakis is an evil bastard and a thug. You know it and I know it.’

‘Nevertheless, his daughter, Ione, is a well brought-up and decent young woman,’ Sander continued with determination, convinced that only such a marriage would have the power to remove his son from the partying, headline-grabbing lifestyle that was currently breaking his adoring mother’s heart. ‘I see no reason why—given time—you shouldn’t find happiness with her.’

No reason? Bitterness hardened Alexio’s lean, powerful face, his brilliant eyes darkening. He could no longer imagine being happy with any woman. But Crystal, the woman he had loved beyond any other, was undeniably gone. But then the issue of his late fiancée was not a subject his father would care to tackle, for the older man was no hypocrite.

Alexio’s conservative Greek parents had hated Crystal and had refused to accept her as a bride for their only son. Her wild-child reputation and chequered past had offended their sensibilities. When he had put an engagement ring on her finger, his father had been outraged and his mother had wept, and for months afterwards Alexio had cut his parents out of his life. Only in the wake of Crystal’s death had the divisions begun to heal and, even then, only because he had initially been in such a haze of despair that he had been incapable of rousing himself to the effort of rejecting his family.

Yet since then every business deal he had touched had turned to solid gold. He was now infinitely richer than his father had ever been for, while Sander had inherited his shipping fortune and merely conserved it, Alexio had gone into venture capital and software development, taking risks that his more cautious father would never have countenanced. It was ironic that only his own massive monetary gains in recent months could have put him in a position where the billionaire tycoon, Minos Gakis, would consider him as a potential son-in-law.

‘I have never even met Gakis’s daughter,’ Alexio said drily.

‘You have,’ Sander contradicted immediately, his brows pleating. ‘According to Minos, you met her when you spent the night on Lexos.’

In his turn, Alexio frowned, but even more darkly. A couple of months back, his yacht had run into difficulty in rough seas off the coast of the island of Lexos and he had radioed for permission to dock there, for Gakis was notorious for the brute henchmen he employed to guard his private island from unwelcome visitors. As it had transpired, Alexio had been made very welcome, indeed lavishly entertained by the reclusive tycoon, but it had been an evening almost surreal in its ghastliness.

Although he was well into his sixties, Minos had had a mini harem of beautiful bimbos staying in his palatial villa and Alexio had been invited to choose one of those women to complete his night’s entertainment. He had been revolted by how very willing the fawning females involved had been to satisfy the older man’s jaded tastes. Even so, Alexio had not made the dangerous mistake of discussing Minos’s proclivities with anyone on his return home. Minos Gakis would make an implacable enemy and only a fool would risk awakening the ruthless older man’s wrath to no good purpose by talking out of turn. And when it came to anything that might threaten his thriving business empire, Alexio Christoulakis was no fool…

Surely one of those bimbos could not have been Ione Gakis? Beneath his father’s bewildered scrutiny, Alexio vented a humourless laugh at that unlikelihood for, though Gakis was far from being a likeable character, he was not unhinged. But, plunder his memory as Alexio did, he could not recall meeting any other woman that night. Apart from the housekeeper who had shown him to his suite while he’d still been seething with thwarted fury over her employer’s offensive amusement at his guest’s refusal to sleep with a whore.

‘Let me refresh your memory,’ Sander Christoulakis breathed in some discomfiture, evidently having hoped that his son would recall the young woman without the prompting of the photograph he now set down on the table.

Alexio focused on the photo with incredulity and instant recognition. He muttered a sudden curse and reached for it. Having been taken in profile, it was not a very good shot, but he remembered that submissive bent head, that pale hair pulled back in a severe style and those fragile facial features.
‘I thought she was the housekeeper!’ Alexio confessed with a sound of frank disbelief. ‘She behaved like one, not like the daughter of the house! Gakis snapped his fingers and she appeared and he spoke to her as if she was a servant. That timid little thing was Ione Gakis?’

‘Minos did say that she’s quiet and shy.’

‘Colourless and mousey,’ Alexio countered with ruthless bite, but a faint dark line of colour now scored his sculpted cheekbones and he swung away for, even in the mood he had been in that evening, he had not been impervious to her natural appeal.

He remembered her all too well: the delicacy of her fine features, eyes as green as emeralds and as startling and unexpected in a Greek woman as her fair colouring. A beauty without artifice and the absolute antithesis of the voluptuous and artificial party girls paraded before him by his host. He had never made a pass at a servant in his life but only her silent formality and his own innate sense of fair play had haltered him.

‘I understand that Ione has hardly ever been off that island. Her father believes in keeping his womenfolk at home,’ Sander Christoulakis remarked with the wry fascination of a man who had a wife and two daughters, who thought nothing of flying all over Europe merely to visit friends or shop. 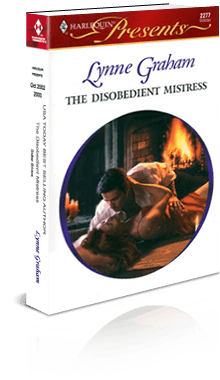