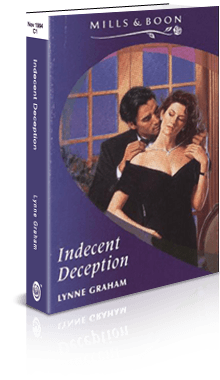 For one moment after Chrissy overheard Blaze Kenyon making a cruel joke at her late mother’s expense, she knew the heady sensation of revenge – but then she realized she’d lost control, and her job… and put herself totally at Blaze’s mercy! She had to accept the housekeeping job that Blaze then arranged for her, if she was to provide a secure home for little Rosie. Chrissy comforted herself that even if it hurt to accept Blaze’s help, it wouldn’t be him who would be her lord and master, so he couldn’t make her the target of his blackmailing, womanizing ways…

Buy in the UK

Buy in the US

Chrissy leapt off the bus and splashed straight into a puddle. Dirty water spattered the pristine overall she wore beneath her unbuttoned coat. With a groan of exasperation she fled on down the road, frantically checking her watch. She was late for work.

As she dived across a narrow side-street, the screech of brakes almost deafened her. Jerking round, she had a brief blurred image of the car bearing down on her before she lost her balance and landed with her behind and her two hands braced on the wet tarmac. Winded and shocked, she just sat there dazedly appreciating that she was still in one piece. The glossy black bonnet of the luxury sports car was less than a foot from her face.

There was something disorientatingly familiar about that clipped well-bred drawl that voiced abuse with lacerating cool. Her wide green eyes climbed up the long straight length of masculine legs sheathed in the mohair blend of bespoke tailoring.

‘Well,’ the same objectionable voice continued, ‘what have you got to say for yourself?’

Chrissy’s dilated gaze swept over a flat, taut stomach and mounted a scarlet silk tie that lent flamboyance to a superbly cut navy suit, and there her head tipped back on her shoulders, impatience spurring her on to confirm her suspicions.

‘Maybe I ran over your tongue…’

Her tongue did have a problem. Disbelief had glued it to the roof of her mouth. Blaze Kenyon. Breathtaking, unforgettable and utterly unmistakable for anyone else. He was incredibly good-looking and soul-destroyingly unattainable unless, Chrissy had once noted, your beauty was on a par with his. Once long ago, in a purely philosophical mood, Chrissy had wondered why beautiful men were invariably attracted only to equally beautiful women. Indeed, until Blaze parted his lips and actually spoke, he was so dazzlingly perfect that you were tempted to pinch him to see if he was real. As his luxuriant black hair ruffled in the breeze, Chrissy was briefly inspected by brilliant sapphire-blue eyes.

Hitching his knife-creased trousers, he crouched down to run a pair of excruciatingly thorough hands over her extended limbs in search of injury.

‘I suppose you do realise that you’re sitting in a puddle.’ Suddenly he smiled, brilliantly, blindingly. He had the sort of charisma that switched on like a high-voltage searchlight, targeting a victim. When he switched it off again, it was a little like being plunged into outer darkness.

Careless long brown fingers were still anchored to her slim thigh. Chrissy unfroze and thrust the over-familiar hand violently away. It was not a reaction Blaze was accustomed to receiving. A slight frownline was etched between his winged dark brows as he sprang up again.

She stumbled clumsily upright on knees that didn’t feel strong enough to support her entire weight.

Blaze didn’t even recognise her. Sudden bitter resentment thrust Chrissy’s chin up. ‘You could’ve k-killed me!’ she condemned. ‘You were driving f-far too fast.’

‘C-Christabel,’ she corrected coldly, cursing the stammer that often dogged her in moments of stress.

Blaze ran a measuring scrutiny over her, taking in dirty hands, laddered tights and curling mahogany streamers of flyaway hair descending forlornly from an inexpert topknot. ‘You haven’t changed,’ he said.

Scarlet to her hairline, Chrissy squashed an embarrassing urge to point out what she felt should have been obvious even to the most disinterested observer. Over the past three years, she had shed almost three stone. ‘N-neither have you,’ she countered with fierce sincerity.

His forefinger flicked the Peter Pan collar of her overall. ‘Are you a nurse now?’ His tone was dubious.

‘Why should you be interested?’ she slung between clenched teeth, fighting her stammer with all her might, and that generally made it worse.

‘Mere curiosity? I wasn’t expecting to meet a Hamilton today,’ Blaze supplied very, very coolly. ‘Are you sure you’re not hurt?’

‘I doubt if you’d care whether I was or not.’ Chrissy clung to her hostility as though it were a suit of armour.

‘You’ve only bruised your pride and your backside.’ A teasing edge had softened his clipped vowels.

A second earlier she had been wondering at the icy edge to his tone when he voiced her surname, but now that was forgotten as her teeth ground together. It might have been three ears since she last saw him, but Blaze Kenyon still affected her much as a whip would laid across her sensitive flesh.

‘I have to get to work,’ she enunciated with stiff dignity. ‘N-nice meeting you again.’

The books below have not yet been published. Click Read More to find out more about the book or Pre Order Now to place your order.

The Italian’s Bride Worth Billions 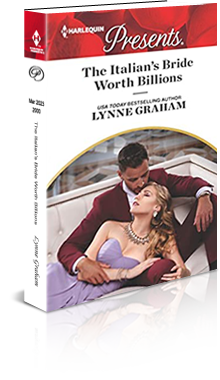 His ring will save her from ruin. Her “I do” will save him from scandal! Gianni Renzetti wastes no time planning the restoration of his reputation when the rumor mill threatens his position as CEO. Asking childhood friend Josephine Hamilton[…]

The Italian’s Bride Worth Billions

His ring will save her from ruin. Her “I do” will save him from scandal! Gianni Renzetti wastes no time planning the restoration of his reputation when the rumor mill threatens his position as CEO. Asking childhood friend Josephine Hamilton[…]

The Baby The Desert King Must Claim 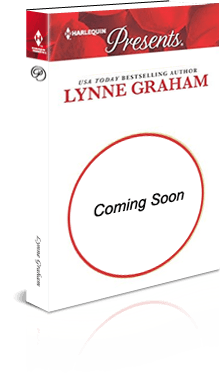 Coming soon! The Baby the Desert King Must Claim by Lynne Graham will be available March 2, 2023.

The Baby The Desert King Must Claim

Coming soon! The Baby the Desert King Must Claim by Lynne Graham will be available March 2, 2023.